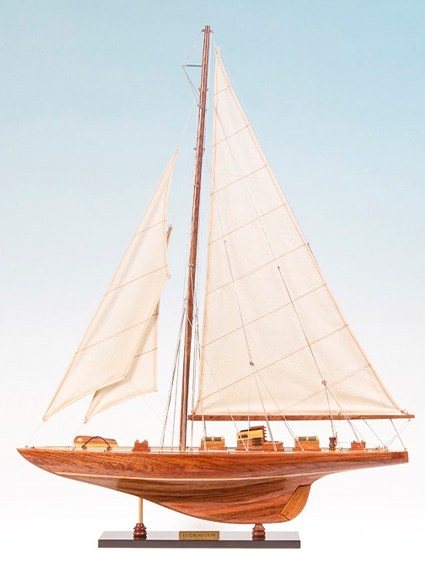 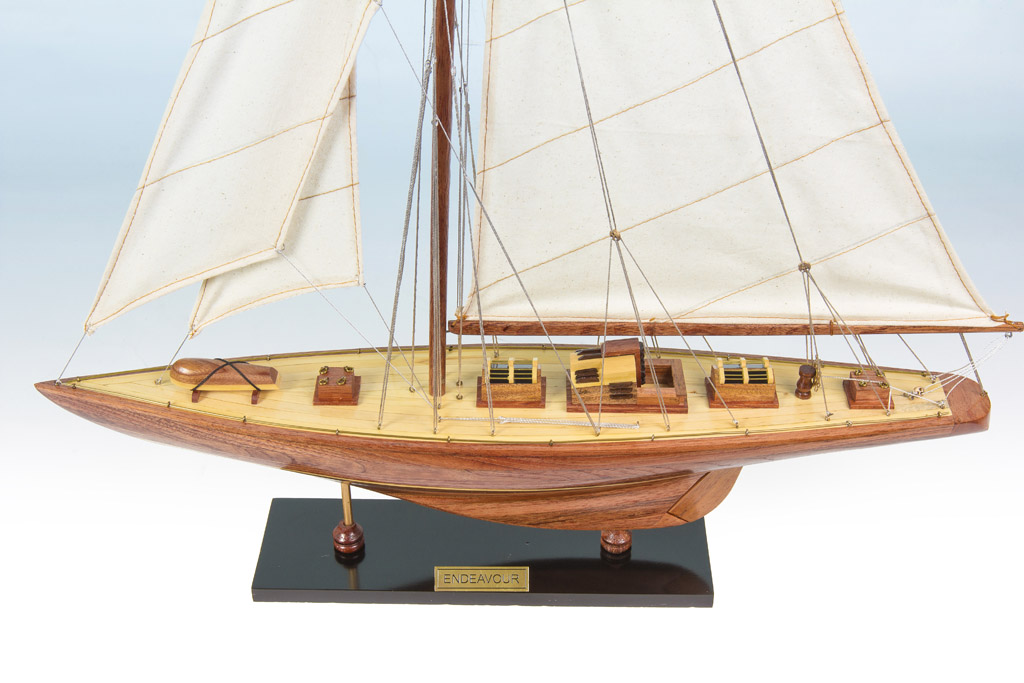 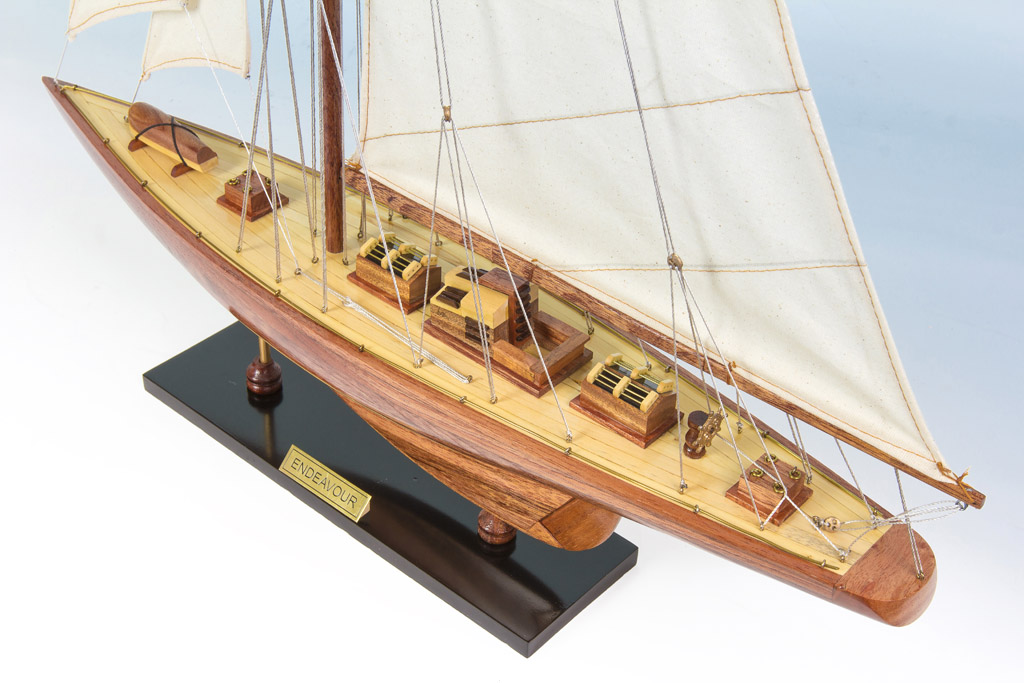 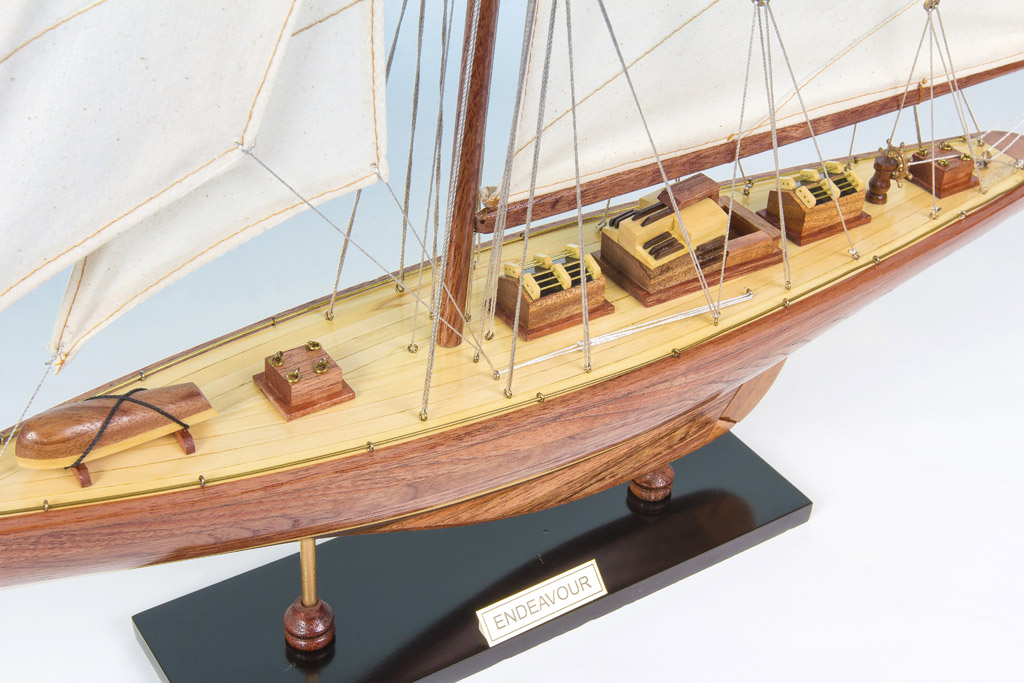 While the America’s Cup has long been dominated by the Americans themselves, Britain has run them close on more than a few occasions. The closest they have come to winning it, though, was with the beautiful Endeavour.

This wonderful recreation, our Endeavour model yacht, is a must-have for all nautical fans and lovers of the sport. This is recreated to help give you as close to the real thing as you can, with this scale model sailing boat giving you a fine item to store, hang or display in any way you choose.

It’s not often that a ship’s name feels so appropriate, but the Endeavour feels like a perfect name for this piece of British history. She might not have won the America’s Cup, but she came closer than anyone else.

This 130ft J-Class yacht was built for the 1934 edition of the America’s Cup, put together by Camper and Nicholson in Gosport, England, for Thomas Sopwith. With his expertise of the seas, Sopwith – who had been owner of the Shamrock V beforehand – completed this advanced take on the J-Class era yachts.

With a steel hull and mast, she rewrote the rules for British entries into this prestigious cup. It’s interesting design, with a displacement of 143 tons, a quadrilateral genoa and also a twin-clewed headsail, she was a very powerful ship. She entered many tournaments prior to the America’s Cup, and won with ease.

With impressive wins against other J-Class ships such as the Velsheda and the Shamrock V (which was a great inspiration for the Endeavour), she gained enough valour to get an entry into the America’s Cup. Sailing off to take on the infamous New York Yacht Club and their sturdy Rainbow, the campaign was the most exciting in years. However, she nearly never started: the crew of Sopwith went on strike prior to heading to the America. Therefore, Sopwith had to improvise and brought together a team of impressive and robust amateurs to help him try to win the Cup.

As one might expect, though, that lack of experience brought unfortunate failure for the Endeavour. She lost 4-2 in the end to the Rainbow. However, she was a contentious win – despite the staff issue – and was remarked in a famous headline as “Britannia rules the waves, and America waives the rules.”

Heading back home in defeat, she managed to dominate the British sailing seasons for years to come. Sadly, disaster struck in 1937 – being towed back to Britain, she broke loose from the tow. She was therefore feared to have been lost. The hull was eventually located, and brought back home so that she could be laid up.

At this point, she went through more than her fair share of owners. In 1947, her end was near: she was set to be sold for scrap, prior to being demolished. Come the 1970s, though, she did meet her end: she sunk in the River Medina, before the remainder of she was purchased for the princely sum of ten pounds. She sat ashore at Calshot Spit, an old seaplane base in southern England, and came into a terrible state.

In 1984, though, a rejuvenation project as underway by Elizabeth Meyer. Five years passed, and the old Endeavour was restored. A new rig engine, generator and mechanical system were included to help ensure she could once again sail to the richest, highest of standards. Meyer, though, admitted in 2014 that the task was nearly beyond her – at least financially. She had to sell real estate to fund the restoration, sailing once again in 1989 for the first time in over 50 years. In September 1989, she took on the Shamrock V, a classic duel, at Newport, Rhode Island. With 90 sailing staff – many unable to be paid – needed, the showpiece event went on as many wished to be involved with such a famous J-class ship.

The work and effort, though, was worth it: in 1999, she took part in the Antigue Classics Regatta alongside the Shamrock V and the Velsheda (also rebuilt). In 2000, she was sold to Dennis Kozlowsi for a fee of $15m. she was then sold on to Cassio Antunes in 2006 to the Hawaiian.

Undergoing an 18-month refit in New Zealand in 2011, she was restored to incredible condition once again being modernised. At the time of writing, the ship is supposedly up for sale – with a price of just under $20m for anyone with a few dollars down the back of their couch!

While she might not have achieved the greatness intended, the legacy and history of the Endeavour left an incredible mark on British and world sailing.