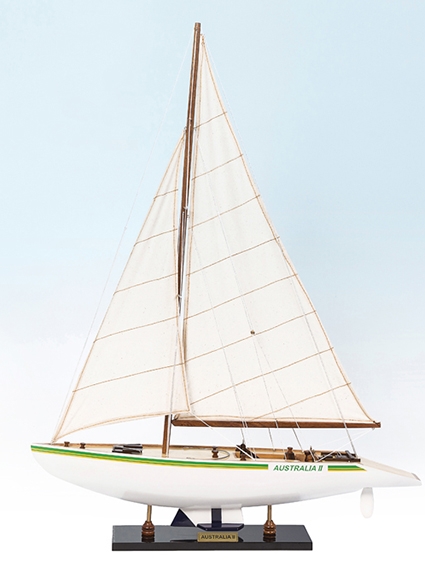 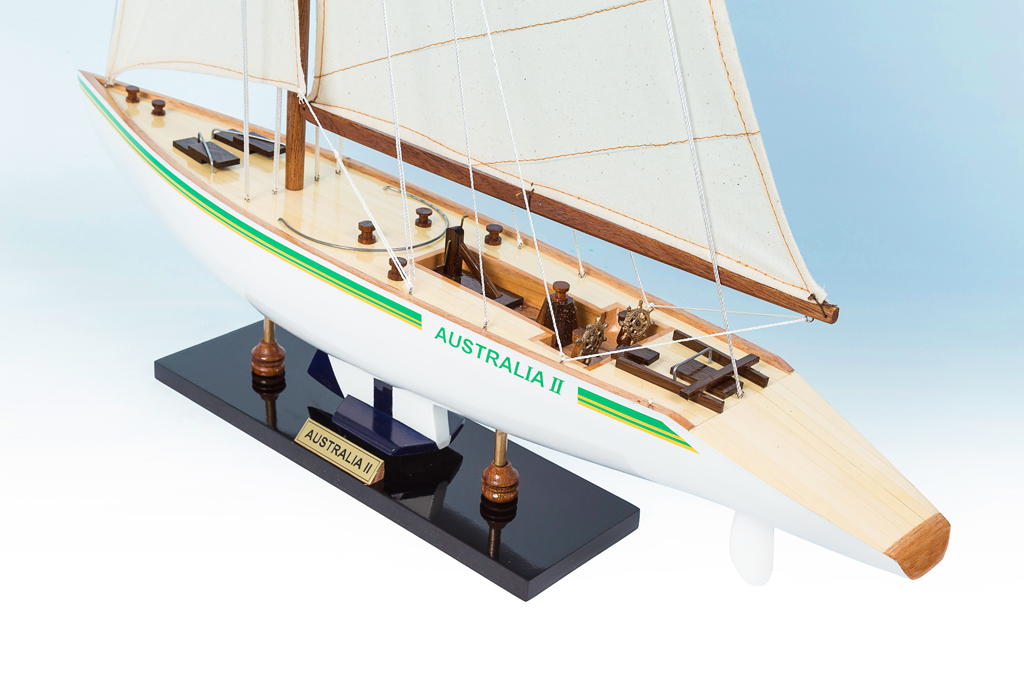 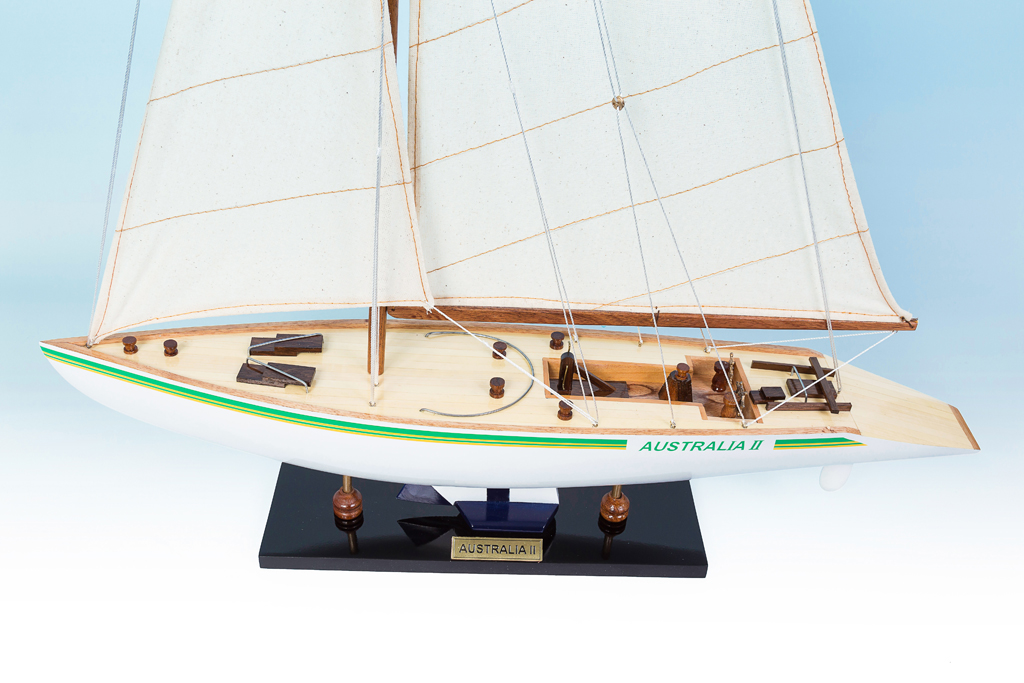 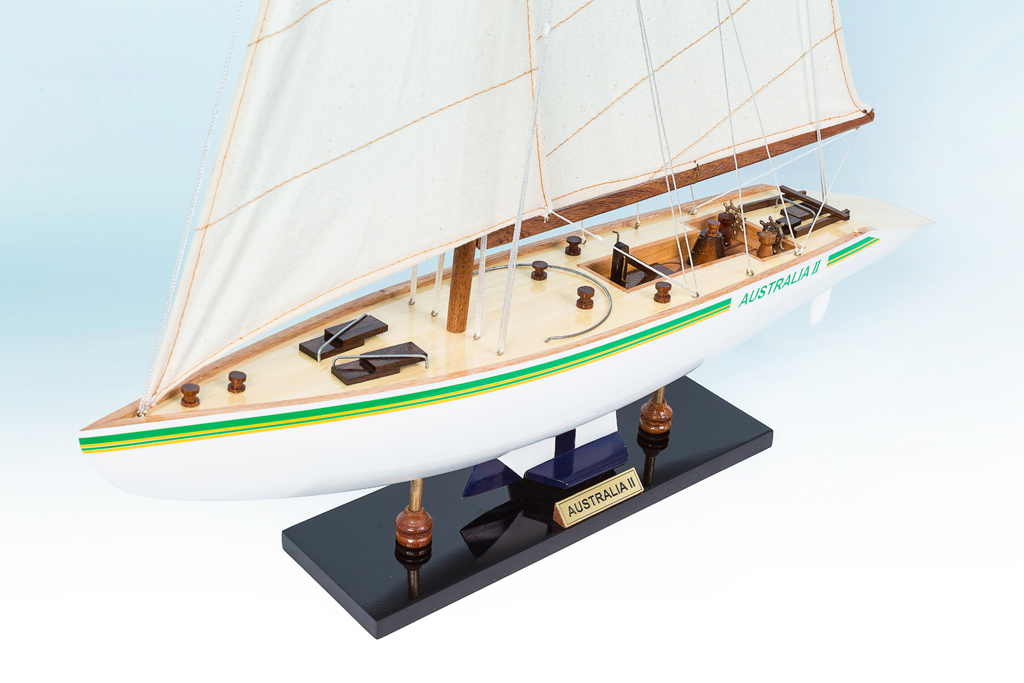 While the America’s Cup is often seen as a trophy won by its domestic hosts, some ships broke the mould. The Australia II was one of the only seven non-Amercan yacht to have done so, triumphing famously in the 1983 America’s Cup. Under the banner of the Royal Perth Yacht Club, this famous sailing boat earned itself both history and notoriety with how she managed to win the cup.

Therefore, she is a boat that has quickly become both a legend of the seas and, in the eyes of some, a villain of the waters. Now, you could get your hands on an Australia II model yacht – perfect for display.

A true model of the Australian yachting industry, she was a culmination of many years of hard work, commitment and craft. The end result is a boat that changed the face of nautical competitive sport for many years. This is why we love having this as one of our wooden sailboats models: she’s a bit of a legend in its own right. Our scale recreation looks to bring the Australia II to life, with everything from the materials used to the shape of the boat ensuring she stands out accordingly.

Indeed, we’ve hand-built this Australia II yacht model to ensure she retains the rich character, charism and class of the real thing. It makes a fine addition to any library, study, board room or office as a defining piece of the room.

The 12-metre class Australia II yacht was a major part of the Australian victory in the 1983 America’s Cup. The sailing yacht was designed by Ben Lexcen and launched in 1982. Under Captain John Bertrand from the Royal Perth Yacht Club, the ship was the first successful challenger to the America’s Cup, making history for Australia’s Sailing Sport. Indeed, its victory brought a 132-year dominance of the New York Yacht Club, including a whopping 26 defences of their title.

Designed with reduced waterline length and also a short-chord winged keel, the boat was far more mobile than those which came before it. The innovation was so impressive, in fact, that it was questioned heavily by the NY Yacht Club. She was also quite innovative in that she included vertical sail designs, and also a lightweight carbon fibre boom: hallmarks of its innovative, unique conditioning.

Put controversy aside, the ship managed to make a huge splash in 1983 when she won the Louis Vuitton Cup. She was a dominant part in the cup, defeating the well-respected Azzurra in the semi-finals before she won the trophy outright with a win against the Victory ’83. This gave her the right to enter the America’s Cup.

She would face off against Liberty, captained by Dennis Conner. The race was incredible, with the best-of-7 format seeing the Australia II come from behind to win 4-3. The victory was a major moment for Australian sport and led to her being awarded the ABC Wide World of Sports Athlete of the Year Award – she had broken the longest continuous winning streak in any sport in history.

Alongside Bertrand, though, was the likes of Will Baillieu and Colin Beashal. Brian Richardson was there, too, with his dual-Olympic wins as an oarsman making him a standout of the team. After its incredible wins, though, the shop was sold by owner Alan Bond to the Australian government. Then, she was lent to the National Maritime Museum in Sydney until 2000. She was then moved to the Freemantle museum, the Western Australian Maritime Museum.

She was shipped over to the Isle of Wight to celebrate the 150th anniversary celebrations of the America’s Cup, with the original crew taking command one more time. The Australia II returned to Freemantle and is on permanent display for all to admire.